Two members of the team at Orkney based energy and environmental consultancy Aquatera are in the running for prestigious national renewables awards.

Gotzon Garcia and Jamie Pratt have both been shortlisted as finalists in the inaugural Young Professionals Green Energy Awards, organised by Scottish Renewables.

Thirty-four-year-old Gotzon has worked with Aquatera’s geographic information systems (GIS) team for the past two years. Originally from Spain, he moved to Scotland in 2008, graduating with an MSc in Energy from Heriot Watt University. 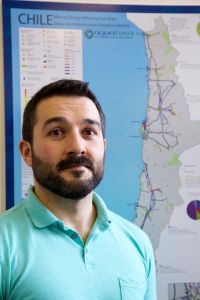 Since joining the Stromness headquartered consultancy, Gotzon has been involved in developing Aquatera’s presence in Chile, where it undertakes work relating to the country’s emerging marine energy sector. The company now has a permanent office in the Chilean city of Valparaiso.

It was Gotzon’s creation of a marine energy infrastructure map of Chile – part of a major study undertaken by Aquatera – that earned him his place in the Artist category of the awards.

“Thanks to Aquatera’s culture of promoting creativity amongst its employees, I started exploring ways to represent the GIS data in a visual, appealing and understandable way,” explained Gotzon. “Chile extends 4,270 km from north to south and it was quite a challenge to gather all the GIS data for such a long country. The map is a visual support aid for the study and a useful tool for understanding Chile’s enormous wave and tidal resources, along with potential niche markets for marine energy projects.”

Meanwhile, 22-year-old Jamie has been shortlisted in the Innovator category of the awards.

Dumfries born Jamie worked with Aquatera last summer on a three-month placement from Strathclyde University, where he is currently completing a degree in mechanical engineering. 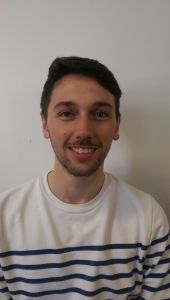 “The work I undertook with Aquatera focused on developing ideas that would reduce the installation and maintenance costs for offshore renewable energy devices,” explained Jamie. “For example, I began the development of a special Remotely Operated Vehicle (ROV) which could service large tidal device arrays, and also created a series of 3D models for the equipment. Additionally, I investigated the utilisation of Aquatera’s innovative tidal bridge concept, where tidal energy devices are incorporated into bridge or causeway structures linking islands.”

Scottish Renewables’ Young Professionals Green Energy Awards were launched this year to showcase the enormous range of fresh talent in the industry. More than 100 entries from newcomers to Scotland’s thriving renewable energy sector were whittled down to a shortlist of 30, across nine categories. Winners will be announced at a gala event in the Glasgow Science Centre on Thursday (28 May).

Gareth Davies, managing director of Aquatera, said: “At Aquatera, we’ve long had a culture of identifying and nurturing new talent, attracting the best young professionals from around the world. We firmly believe that supporting this next generation, through the creation of stimulating and lucrative career paths, is essential for the long-term success of the renewables industry. We’re immensely proud of Gotzon and Jamie, whose outstanding work has rightly seen them shortlisted as finalists for these new awards. All of us at Aquatera wish them the very best of luck on the night.”